Many months have passed since I last posted an update. While my intention was to share anything the project I was working on was too important/too demanding to write an article during the "construction".

The IXS Enterprise, a very early concept of the first real warpship. When I got invited by Dr. Harold "Sonny" White and Mike Okuda, I was absolutely stunned. Did that just really happen? A person from NASA contacted me to do artwork for them? Yes it did! After seeing my rendition of Matt Jefferies "Ring Ship", Dr. White thought that this would be a good starting point for a near future "Ring Ship". At least from a STEM perspective. Because that is the main goal: to get a warpship concept out there that would inspire young people to choose a career in STEM.

However the XCV-330 needed some adaptions to fit to the latest warp theory. After making some adjustments, we quickly realized it would be better to start from scratch. I started to draw some logical (in my mind) shapes, Mike Okuda joined in to give some extremely helpful technical advice. He also concepted a 2D version that made excellent use of the space within the 2 rings. I tried to put as much of it into the IXS without loosing the motivational perspective. This perspective is also the reason why I made some (in reality) rather unpractical design choices. For example the windows in the cockpit, (a small homage to the spaceshuttle) the ship would be fully flown by wire/computer, but to have an outlook into space and to give the ship a face was very important to me. This was the main priority on my wishlist.

For a few weeks we kept tweaking and modifying the rough layouts, and when we finally concluded what direction to go, I secluded myself and started to work out the shapes and think over the details. Meanwhile Doug Drexler joined in to get this ship on the SOTL 2014 calendar. That was even better, I never walked the line between science and SCI-FI this close. (Or reality/fantasy.)

Time passed and I kept on modeling. Because the ship is even smaller than the XCV-330 I wanted to give it a very physical appeance. Very little textures and a lot of real surface detail. This did not really speed up the modeling, but in the end did work out quite well. The smallest edge blend on this ship is 2mm, the paneling and even the slots to keep the paneling in place are all modeled. If a tube flows into something, there is a slot where this tube will go into. No "hull stucking" so to speak. Hardly visible, but in my mind very satisfying.

Deadline for SOTL approached and I had to move on to make this happen. Because of the rather fat rings and the short/stubby length, it was very difficult to get a wide shot that would show it all. After a lot of consideration with Doug we finally got a decent angle. When I finished the SOTL entry (this March) I decided to take a quick brake. After a week I got back into it, and started to convert the entire ship to mesh and to name all the parts. (Over 2000 of them) Also I added more details to the underside of the ship, that was not visible on the calendar shot. I'm currently working on the last phase: texturing the nomenclature/signs/arrows/labels. This will take some time to complete. The result will be the best model I have done so far, the most manageable despite it's 80 million+ polygons and most importaly one that might inspire the next generation to choose for space and science. Lets face it, there is an entire endless Universe waiting out there to be explored. Why are we still here?

p.s. Please excuse any spellings mistakes. I decided to avoid a spell check, English is not my first language and checking will result in rebuilding the text, taking up a lot of time, and most of the time I wont post anything afterwards instead...so its this or nothing. :) 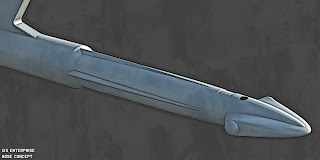 Early adaption of the XCV-330 layout. 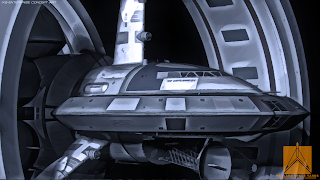 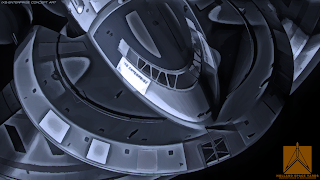 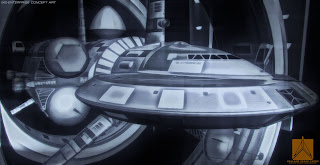 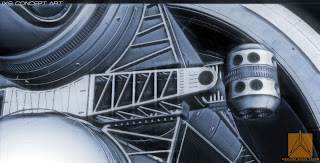 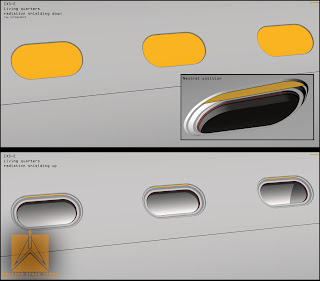 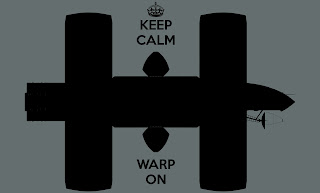 The XCV-330 that started this adventure: 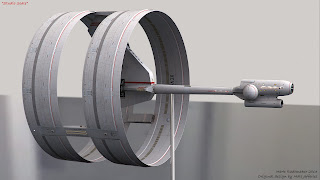